Christmas is coming and all these Christmas parties.
Christmas party with your department, your team, club, friends and more.
In the US we always did a pot luck where everybody was supposed to buy something for lets say $ 5 and has to bring it nicely wrapped to the Christmas celebration get together. You draw a ticket with a number and when it is you turn you are allowed to pick a gift. Usually it is allowed based on the given rules to steal a gift from another colleague and he is allowed to pick another gift.
Shit-wichteln is almost the same with one exception; your are not allowed to buy something.
You have to bring something from home, something you always wanted to get rid off, something that is hiding in your basement for centuries. You wrap it like the best gift ever. And a lottery ensures every gift will find a new owner.We did it last week at our department Christmas party. We had tons of tickets, many blank tickets and others with numbers. You had to buy a ticket (or as much as you want) for Euro 2 and hope for the best; a blank ticket. 🙂
The money we’ve raised went to a good cause, which made it an even better event.
We had stuff like a nose hair trimmer (if used; dunno), weird little figurines made in wherever in the world, more „useful“ stuff to hang at your wall, maybe above your TV or so. We had so much fun, laughing so hard tears were rolling down our faces. You have no idea what creepy stuff is out there and folks are hiding in their homes just to bring it out for shit-wichteln.
Ya wanna know what I got?
A beautiful figurine, a girl with a I guess dove in her hand and a cute little dog next to her. 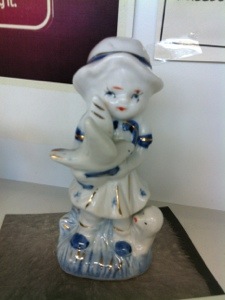